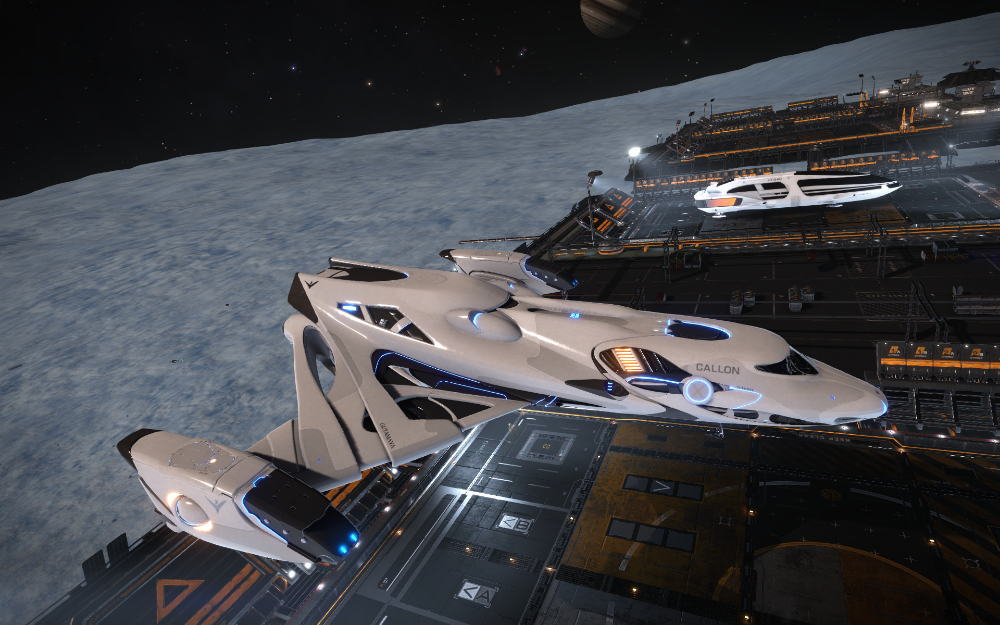 The Imperial Clipper is one of the most beautiful ships in E:D. The Cockpit also has a nice design without some of the disturbing window frames in some other ships. It is a large ship so it can not dock at most outposts but despite its size it is very fast and maneuverable. It is a multipurpose ship that can be used for transporting cargo or passengers, but it is also a very good combat ship due to its speed and agility.

The Python cost almost twice as much as the Clipper. The Python has better weapons (one more Class 3) and can carry a little more cargo. It also have a bigger power plant and power distribution. The Clipper has better jumprange, is faster and much more agile - and only cost half the price. Both ships are multipurpose and do not have any military compartments. Even though the Python has stronger weapons I think the Clipper has the upper hand in combat: It is faster and more agile and also when aiming at the top or bottom of a Python you can hardly miss - it is such a big and slow target!

The FDL cost twice as much as the Clipper so you would expect to get twice as good a ship. Well, not exactly... The FDL is fast and agile - but the Clipper is faster and more agile at half the cost. The FDL has poor internal compartments and low jump range making it useful for only short range combat missions. It does carry a powerful Class 4 and four Class 2 weapons. Neither ship have any Military compartment. The FDL is super fun to fly but the short jump range and limited number of internal compartments is very annoying.

The Clipper is just a little more expensive than the FAS and the two ships have a lot in common: They can mount the same weapons and have almost identical sub-systems, only difference being the sensor suite. The Clipper however has a better jump range, is faster and more agile, and can carry about 200% more cargo. The FAS has better weapon placement so it might be a better combat ship but haven't done enough testing to make any conclusion yet.

The FDS is cheaper than the FAS and Clipper. It has lower jumprange and worse weapons. Flying the FAS feels like flying a cargo ship - it handles badly and is not recommended for serious combat, only as armed cargo or passenger transport.